I've been passing a particular location of Dino's Storage nearly every day for years.  They often have quotes on their marquee.  Sometimes it's something nice.  Most of the time, it's something religious.  They recently wrote on their website that the quotes are their way of "giving back to the community while glorifying God"[1].

Today, this was the quote: 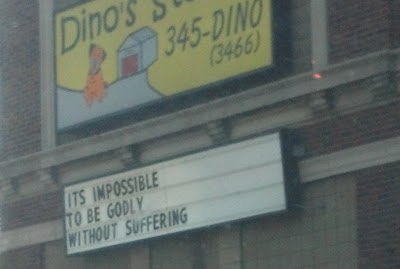 This is what's wrong with religion.  It allows this message to be considered as contributing a positive message.  And it's not like this particular message is limited to this sign.  I see this sentiment promoted by Christians as often as I see them threatening me with Hell[2].  Promotion of suffering[3] was a favorite pastime of Mother Teresa[4].

That's one of the biggest differences between Christianity and Humanism.  Christianity sees suffering as a good thing.  Humanism dares to say suffering is bad.

And they say we're the ones without morality[5].